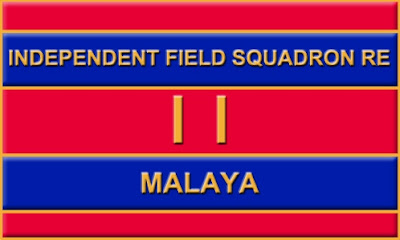 HISTORY OF ANNUAL REUNIONS OF
11th INDEPENDENT FIELD SQUADRON
The first reunion of ex-Members of 11th Independent Field Squadron, RE. Was held in1980 and organised by Jim (Paddy) Woods.
The possibility of holding a reunion had been talked about when Jim met with Eric Eamer and Darkie Turner at a Chatham ‘At Home’, Derek Bridal was also involved.
With the enthusiastic support of members and there wives, Jim was asked to organise a reunion in his area and WHITE GURKHA 1980 was born.
The code name White Gurkha was chosen because when 11th Ind Fd Sqn was in Malaya they shared a camp at Sungi Besi with the Gurkhas. They were at one end of the camp and
11th Ind at the other. The Officers seconded to the Gurkhas had a very high opinion of them but rather looked down on 11 Ind Fld Sqn. So they called themselves the
WHITE GURKHAS.

Arrangements were made and as many people were invited as addresses were available for at the time. The group assembled in the White Hart Inn, Newbold-on Stour, and nr. Stratford-on-Avon, (Jims Local) on Friday evening and had a meal together there. Saturday lunch was in Jim and Dorothy Woods home and the evening was spent in the WO’S and SGTS Mess at Long Marston, Nr. Stratford-on-Avon. This was at the invitation of the Resident RSM and because Jim was Honorary Mess Member.

The event was such a success that it was repeated each year until 1989, settling down to a programme of dinner in the White Hart on Friday evening and a magnificent Buffet in the SGTs Mess on Saturday evening.

The original group who were present in 1980 consisted of:-
Jim and Dorothy Woods Eric and Marie Eamer
Derek and Marjorie Bridal Johnny and Yvonne Adams
Bill and Joyce Kendrick Darkie and Gisela Turner
Danny and Pat Daniels. George and Joan Thompson
Dennis and Joan Gwatkin

Over the years the numbers grew as more names became available and in time they were joined by some of the Officers and their Ladies.
Including:-
Major Gen. W. Cooper CBE, MC. Colonel TOG Cochran OBE, MC
Colonel C Mathews Major A.A Jackson

Jim and Dorothy Woods handed over the organisation on moving to Ireland and the reunion was re-established in 1993 by Johnny Adams and held in the Bath Hotel in Bath. It has subsequently re-located to The Old Mill Hotel Batheaston, which has proved a popular and convenient meeting place for most of the original members.
Currently organised by
Fred and Millie Aldred
History From Jim and Dorothy Woods

After Fred Aldred Passed in 2011
Julie Easter (daughter of John Adams) continued with reunions for a few years, eventually
joining with Coventry reunion.

I must include in this history the reunions of THE OLD LAGS organised and run by
Anthony Catherall up in Doncaster, which later also joined us at Coventry.

In 2007 at Bath reunion Richard Clarke brought forward the idea of having reunion
in a more central position of the country and Coventry was the chosen venue.
Richard asked me (Hank Lawrence) if i would help by adding details etc to my
website and assist with reunions. From 2014 when Richard passed, Geoff Lambourne and myself
have been carrying the torch.

Coventry
The reunion organised by

It has to be said that this reunion was a huge success
due to the fact that the location was so central.
I will be adding the names of those attending soon
plus photos to the reunion album as they come in
so please start sending them ASAP

Dear Friends
Just a short letter to say thank you for turning up this weekend a great turnout Ninety-Five people and the hotel did us proud, good room's food was excellent we met old friends we had not seen for a very long time.It certainly paid off having it central for everyone; I have already booked the hotel for next year dates 5th,6th &7th June and forty-eight rooms block booked, I will confirm the prices at a later date.So come on find those people who are missing and lets make it even bigger next year.I have to say it was nice to have Gordon & Vicky Chave their and it would be even nicer to have more of our officers attend next year. Kind Regards

Help
Please send me all reunion photos you
took to be included in reunion album
and remember to send self portrait so i can
name the group photos, job to remember
all names

Doncaster Reunion
21 June 2008
Reunion You were missed of course,but we had a nice time as usual we had another new colleague in that of Chris Smith (Smudge) he came up from Shropshire. I will send you a picture of the group shortly. The next Date is 11th July 2009 so we hope to see you then. Frank Sowerby, John Flynn Brian Marshall and me have just returned from the most fantastic two weeks in Penang Langkawi and Kota Kinabalu, we were treated like royalty and made some wonderful friends in The Kinabalu Club, who put on a luncheon for us to say nothing of the complete hospitality whilst we there one afternoon and evening. We have over 700 photo's and we had a projector to show everyone at the re-union. they are now talking of going back again after seeing them. Keep well all Regards Tony Anthony E Catherall
List Of Those Attending


Tony Catherall John Flynn Frank Sowerby.
Link to News Paper Article 1
Link to News Paper Article 2
________________________________________
I Have decided to add this ref. to a reunion from the past
From Jim Woods in Ireland about Phil.
Phil Langley Passed away 27th June 2002 after long ilness.
Photo 1. His Wedding 1957.
Photo. 2. Group of some Officers and original N.C.Os of 11 sqn at annual reunion,
White Gurkha 1988 at W.Os & Sgts Mess Long Marston nr. Stratford-on -avon
Phil is on left of chelsea pensioner Tiger Benson former member of 11 sqn.
Photo. 3. Taken at a reunion again, Phil extreme right next to him Eric Eamer,
then Dennis Gwatkin and Jim paddy Woods
Jim is the only person of the groups alive today.
_______________________________________________________
Bath Reunion 2008
At the Old Mill Batheaston
10th 11th 12th October
Fred Aldred Here, Just returned from the 6oth anniversary reunion of the Squadron.
Very good turnout and much enjoyed by all of us. Next year's reunionis to be on 9th&10th October and I have arranged to have a number of rooms pencilled in guaged on this years figures.
I look forward to meeting any of our Squadron and am able to accommodate up to 100. If you want details give me a ring on 01254830710 or E Mail millyfred@btinternet.com
I promise I dont Bite.Look forward to hearing from you . I have several who were in the Sqn in the 60sRegards Fred
List of Those Attending
Jim & Dorothy Woods, Fred n& Amelia Aldred, Dave & Pam Brunning,
BobWilliamson, Chunky Allen, Bill & Maureen Murison, Taf & Lucy Bishop,
George(*Yanto) Nolan, Terry & Mary Long, Terry & Judy Davies(410),
Sid & JanHutchings,Harold& Anne Jones (not Sqn) Norman & Rosina Donaldson,
Doug & Edith Scott,Ted & June Owers, Gorden & Wendy Jefferis,
Alex & Shirley Jackson, Terry &Sarah Tullis,
Yvonne Adams & her daughter Julie Easter.